540 MILLION EUROS FOR THE SHELTER 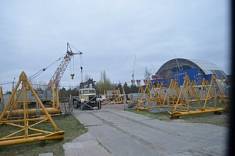 Recently, on May 8, 2015, at the Government House, the Minister of Ecology and Natural Resources of Ukraine Igor Shevchenko held a briefing for media representatives.

The question was raised of the result of a trip to London on the issue of raising funds for the completion of the Shelter object.

To complete the construction, it is necessary to attract another 75 million euros. There are hopes that donor countries that have declared their readiness to participate in financing will be able to allocate the necessary amount. It is worth noting that specific amounts have not been announced.

The EBRD, as a guarantor of fulfilling the financing conditions for the Shelter facility, will provide the scarce part needed for completion.

“The world community understands the importance of resolving the consequences of the Chernobyl accident as soon as possible, so 43 countries have expressed a desire to finance the completion of a new safe confinement. There is no doubt that the construction will be completed on time and within the budget, ”said Minister Shevchenko.