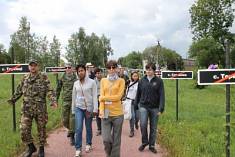 The disaster, which occurred in April 1986 at the Chernobyl plant named after Lenin, generates a lot of topics for discussion
People who are far from this topic, think that the Chernobyl exclusion zone occupies an incredible amount of queer animals, two-headed mutants and scary werewolves roam there, as well as two tails cats and 5 eyes dogs…
In fact the situation is much better than in the people created myths.
There are many photo-traps placed at exclusion zone and it shows that all photographed animals are quite normal – the same what we can see at the zoo, on television, on the nature.
Nay there are ordinary animals that live there as well as the people who live and work there!
There are working people in the Chernobyl zone who are providing livelihoods Exclusion Zone.
Shift workers work daily interchanging their work according to shift schedule (4/3 or 15/15), and there are also the ones called squatters and a lot of movies were made and numerous articles are written about them.
Shift workers mostly live in the town of Chernobyl and work in all corners of the Chernobyl zone. Pripyat city is not an exception.
Area lives its own life
Let me remind you that the sarcophagus was built shortly after the 1986 accident.
And the current state can hardly be called satisfactory.
Shift workers also work at forest areas of the exclusion zone.
In the town of Pripyat there are on duty people at the checkpoint who are working in shifts too.
They can be found at the station of fluoridation, garages, also there are few radiation supervisors on duty.
The daily workers are those people who live in Slavutych and every day come directly to the station.
Slavutich is located in 50 km from Pripyat and was built almost immediately after the accident.
It is a satellite city of the Chernobyl.
Many Chernobyl people give themselves to their work here, providing vital activity of this area.
What do the workers of the Chernobyl station if it does not produce electricity, you ask? —
Nuclear power plant is not some warehouse, which one can lock up and go home forgetting about it.
It is a collection of buildings and complex structures which require constant monitoring and maintenance even in anechoic condition.
This is a very serious object that must be preserved.
Put out of action the equipment, something take out, something keep reserved.
In general, the works at the stopped nuclear power plant enough even for our grandchildren.
So those people who work daily have a deal with that kind of works.
They do service and canning of nodes of the stopped enterprise.
The squatters at the Chernobyl exclusion zone are the most older adults who live constantly at this zone and have their own farm, engaged in the fishing industry and engaged in picking of mushrooms, solely for their own consumption.
Many of them have their own vegetable garden and plot where they can grow crops.
Squatters as all pensioners remain on the balance sheet of the state, they receive a pension. A postman paramedic is also exist at the exclusion zone and brings them pension once a month and offer his services.
The mobile shop comes twice a month.
Mobile shop brings everything what squatters need for life.
Flour, salt, sugar, some medicine.
The middle age of the Zone people – more then 70 years.
Many people have relatives outside the limits of exclusion zone.
Often at a Dityatki checkpoint you can see the squatters which are crossing the border of the exclusion zone and going to the “big world” to have a meet with their children or other relatives.
Also the intercourse between tourists and self-settlers are in demand.
To communicate with them, to bring something, to support these people you can during an excursion to Chernobyl and Pripyat with go2chernobyl.com.
The Chernobyl Exclusion Zone is inhabited by people and we can not call it empty.
The number of tourists is couple of thousand per year in the exclusion zone.
The familiarization tours in Pripyat and Chernobyl nowadays have become so popular that no one denies that this is a type of mass tourism.
Go2chernobyl.com invites you to visit the exclusion zone, to pay a tribute to the people who gave their lives in the fight against peaceful atom.
Anniversary of the explosion at Unit 4 nuclear power plant named after Lenin were marked the 27th of April. It is located in 3 km from Pripyat.
We invite you to visit a nuclear power plant, the city of Pripyat, the city of Chernobyl, Chernobyl-2 and Duga (ЗГРЛС Дуга ).
as well as many villages and places where you have never been.
Discover the Chernobyl exclusion zone such as we know it.