Is Ukraine safe to visit? 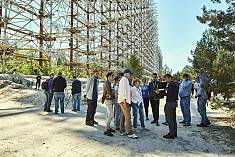 Ukraine is mainly notorious by virtue of two events: civil war and nuclear catastrophe at Chernobyl. No wonder why many of us concern about how safe it is for travellers to travel and visit Ukraine and its capital Kiev. Please note that the war is bound by the borders of two regions in the southeast part of the country. The rest part of Ukraine is completely peaceful and cannot be considered as a place dangerous to visit unless you decide to travel to the regions overwhelmed with combats where your safety will be doubtful. Taking into account all this we must admit that it is safe to go to Ukraine in terms of the war.

The second event was caused by Chernobyl atomic power station accident in 1986 that was followed by the aftermath. This incident is exceptional since this is the only spot on our planet where we had a nuclear disaster in a such big way that there appeared a so-called Exclusion Zone. Atomic detonations at Hiroshima and Nagasaki had been a poor comparison to what happened in the north part of our country. One of the consequences of that explosion is the appearance of tourists who are eager to visit the place of nuclear catastrophe. When we say tourists we convey the general conception of people visiting the Zone, but all of them can be divided into three groups:

There are certain requirements that must be adhered to so that your journey along the route may bring you only positive emotions and spare you from negative consequences.

GO2CHERNOBYL — Your Partner in Visiting Pripyat and Chernobyl

Now knowing all this you understand that Ukraine is totally safe for tourists in case if they abide by the rules and don’t make rash acts. Join us and our guides will lead you through to make you want to return here again! Get in touch with our managers online on our website or by phone and they will provide you with all the necessary information and help you to choose your best tour. Take in mind that our guides fluently speak English, Polish, German, Spanish, and Arabic.