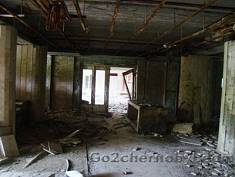 The official organizer of trips to the Chernobyl exclusion zone go2chernobyl.com offers a very high level of service. Visiting Chernobyl and Pripyat with the help of professionals is simultaneously extremely safe. After all, exciting and interesting programs along with the safety of our customers are the most important for us.

This, as for the legal and safe trip to a place that drives almost all extreme people and lovers of unusual vacations crazy.

Today we’ll talk about another type of visit to the Chernobyl zone - illegal. It’s worth saying right away that we don’t do this and we don’t advise you.

What is illegal Chernobyl tourism. It can be qualified as illegal penetration beyond the perimeter of the Chernobyl exclusion zone and the zone of unconditional (compulsory resettlement) without the permission of the administration of the zone and without an accompanying person. The so-called stalkers penetrate the crossings, bypassing the checkpoint at your own peril and risk. The purpose of the campaign, as a rule, is an illegal visit to Pripyat and Chernobyl-2 (ZGRLS Duga), which is 30 km on foot in a straight line in one direction and 30 km back, not by asphalt and smooth road. At the same time, you need to remain unnoticed and not fall for numerous patrols.

To visit the pearl of the exclusion zone - the city of Pripyat, while experiencing all the difficulties and finding out how dangerous the Zone is alone, risking your life at times - is this a worthy goal? For someone, oddly enough, it turns out yes.

What can I say. All further information may be used for educational purposes only. The go2chernobyl.com team is not responsible for people who decide to practice this type of visit to the Chernobyl Exclusion Zone. We are for legal Tours.

Firstly, visiting the exclusion zone without the knowledge of the administration is a violation of Ukrainian law.

The area is constantly patrolled by police, and sometimes there are helicopter overflights. Helicopters are used to a greater extent to identify fires in the summer. Equestrian and motorcycle patrols, as well as a large system of roadblocks, are also common in the zone. The detention of illegal stalkers occurs constantly, almost every day. There is a constant struggle against illegal immigrants in the ChEZ.

If you go legally on a tour with go2chernobyl.com, you will have a special pass, the permission of the administration to visit the ChEZ, you will be accompanied by a qualified guide who will give you a lot of useful information, answer all your questions, you can chat with dumpers and workers ChZO in a relaxed atmosphere ...

Secondly, in the exclusion zone, people are in the power of mother nature, who has chosen almost the entire exclusion zone. Numerous packs of wolves and wild boars, which obviously will not be happy to meet strange guests, will not very pleasantly surprise people who dare to do this. This is especially true in the winter. Recall that illegal immigrants go on their hikes year round and it’s stupid to think that something bad can happen to anyone but not to you.

In the hot season and not only illegal, another surprise awaits - a large number of reptiles, in particular vipers and clouds of midges. Snakes well, what can I say ... If an illegal immigrant, who will be tens of kilometers from civilization, is bitten by a snake during his campaign, the standard actions that were taught at school should be followed. Here it is a matter of tolerance by each person of a dose of poison and a strength of immunity possessed by a grief tourist.

Even reaching the nearest illegal checkpoint you cannot be sure that there is an antidote. We'll have to wait until he gets to the hospital. And if the unfortunate tourist does not have special insurance operating on the territory of the ChEZ, then this is generally sad ... So think for yourself.

A huge amount of midges will not let go. Well, it’s just impossible to go when there are swarms of incomprehensible living creatures circling over you, which haunts you and does not want you to take even a step. If you follow the advice of some stalkers who have experienced difficult trials during illegal trips, you should take such actions to rid yourself of midges - to light a fire from pine branches, soak in the pungent smell of this New Year tree. Stop, and the smoke can issue a patrol, which, as always, is nearby and is waiting for such unfortunate tourists. Advice, of course, not really ... Try using liquid smoke (just kidding).

Thirdly: the dilapidation of buildings in villages and towns, in which, in any case, it was illegal to stop for a halt or overnight leaves much to be desired. The floorboards are rotten long ago, the roof can fall on your head at any time. If a fracture of the lower or upper extremities occurs, the stalker will have to get to the medical care center on his own, and his campaign will not end there. They will help him, open an investigation, interrogate, hold him accountable, pass on information to the place of work (study). Yes Yes exactly.