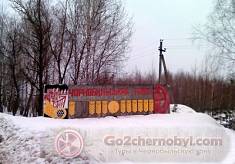 More than 25 years ago, a world-wide tragedy occurred at the Chernobyl nuclear power plant, and the area that once lived a full life turned into a gigantic exclusion zone. Interest in this event has not ceased to this day, so for those who want to get acquainted with the real situation at the Chernobyl nuclear power plant, a trip to Chernobyl is offered. Such a study trip refers to extreme types of pastime and recreation. However, taking care of your safety, we have developed special routes, the radioactive background on which is even lower than in the capital. With our guides, the tour will be completely safe for your health.

The program provides a trip to abandoned villages, you can also go to Pripyat, this is a ghost town, or, as they call it, a dead city. The population of Pripyat was evacuated in May 1986 and since then nature has been rampant there. Traffic lights do not work here, there are no cars and pedestrians on the roads, and the usual exclamations and noise are not heard. Empty multi-storey buildings, kindergartens, quiet schools and deserted streets of this city make an indelible impression on tourists.

Excursion to Chernobyl cost
But a trip to Chernobyl is not only a tour of the abandoned areas, it is also an introduction to the work of the Chernobyl itself. Despite the fact that the station completely ceased its activity as a nuclear power plant back in 2000, there are many people working there to deal with the disposal of spent fuel residues, and this process will continue for many more years. Today, the Chernobyl exclusion zone is a kind of giant reserve, in which wild boars, bison, foxes, moose, wolves, as well as many populations of other animals are found. Thus, you simultaneously get acquainted with the work of the station and relax in nature.

We are glad to inform you that for a trip to Chernobyl, prices are not high and affordable to everyone. The cost of the tour ranges from 599 UAH. (888 UAH. For foreigners) from Kiev to 1250 UAH. (1450 UAH for foreigners) from other cities - for example, from Donetsk. The tour is possible in a foreign language. You can choose any time suitable for you to visit Chernobyl according to our schedule. You also have the opportunity to book an individual trip to Chernobyl, the price of which depends on the number of people in the group and may even be lower than the group price. Such a trip is possible on any day convenient for you, subject to the submission of documents in advance (10 days).