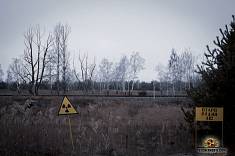 Chernobyl's Red Forest that sometimes is called Rusty forest is one of the places of interest during your tour to the Exclusion Zone. It occupies about 200 square kilometers not far from the Chernobyl Nuclear Power Plant. This wood is notorious for the fact that it was polluted with a substantial amount of radioactive dust that was released into the air after the explosion of the 4th power generating unit in 1986. The tremendous dose of absorbed radiation brought about the ruin of all trees — mostly pines. Also, radiation transformed these trees in Chernobyl's Red Forest in regard to their color making them reddish and fulvous within thirty minutes after the blast. Pine tree crowns are thick enough and had been effective filters, which contributed to an accumulation of an essential amount of radioactive dust within their crowns. Needle-foliage is changed every three years that brings about a slow cleaning of fir trees and this fact enhances radiation poisoning of conifers in comparison with other plants. Later earthmoving machines and bulldozers demolished and buried these trees in trenches for the purpose of radiological recovery and decontamination, then covered them with a sick layer of soil and planted them with pine saplings.

By the nature of radiation poisoning scientists divided it into four zones:

In general, nowadays Chernobyl's Red Forest is the place where you may notice scores of different animals and its flora has become fertile again. Water sources inhabitants had been lucky more than those who lived outside since water has natural protection against gamma rays and radionuclides in whole.

Our guides are glad to welcome you to the Exclusion Zone. Chernobyl's Red Forest, as well as many other interesting places, has been included in a tour schedule so that you may see how the new life takes over the old one that fell victim to the disaster that had happened in 1986. Grab your backpack, equip yourself for a fascinating journey and join our guides who will lead you through the trails blazed by brave stalkers.

Don't waste your time and plan your trips beforehand in order to receive a 17% discount. Our managers are waiting for your calls, messages, and emails!