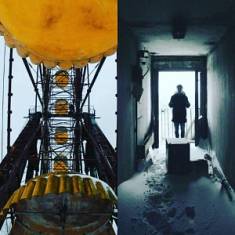 Many tourists can’t decide when it’s better to go to Chernobyl? Somebody likes green spring and hot summer, others prefer mild autumn, I personally like winter. That is why I decided to book the Chernobyl tour in winter using the services of Go2chernobyl.com.

It was snowy in long waiting morning, I hurried up to the meeting point and the bus had already been waiting for us. I excitedly nested myself in the chair. Soon noisy city was left behind and new landscape appeared in front of me. There were trees and fields covered with snow.

Shortly we were at the checkpoint Dityatki, where we have passed t passport control. Our guide Eugeniy met us there too and we drove into 30-km zone and our Chernobyl tour began. Silence around us was disturbed only by the guide who told us about locals and sights of Chernobyl Zone. Here you won’t find a lot of people, but life is still blooming around. Walking around, I have seen a hare and a fox. Old houses have become a perfect shelter for some of the forest inhabitants and bushes hide them from people’s eyes.

Pripyat was completely different… Half destroyed living blocks were looking at people with their empty windows. It was very quite there, even creepy. Chernobyl tours in winter are not very popular, that is why you won’t see here a lot of tourists and you suddenly feel alone in the whole world. Snowy streets are beaming on the sun; nobody walks here, so you can easily find the footprints of wild animals that feel here like at home. The wind was howling between the trees and it was getting colder but I was still on my way.

We got back in the bus. There was Red forest on the horizon line, we made a circle around the Chernobyl Nuclear Power Plant and stopped near the new confinement the Arch. It’s really huge!  Eugeniy mentioned that it took 8 years to build it and almost 1.5 milliards euro were spent on that. Its area equals the area of 12 football fields, and its height is 110 m. so it is 8 m. higher than that statue of Motherland in Kyiv. After the new Arch had covered the Shelter object, the radiation level on the viewing point lowered in 5 times. It is supposed that new Arch would be valid at least 100 years.

After that we went to have a dinner at the Chernobyl canteen. The dinner reminded me my childhood and it was very tasty.

Alas, my Chernobyl tour was ending.

The time flew very quickly, because the tour had been very impressive and interesting. I have made a lot of cool photo and got unforgettable emotions. I would like to thank the organizers and the guide Eugeniy for the unforgettable tour and perfect experience. I will visit the Chernobyl zone once again, but next time I will take a two-day tour.