Certificates
Tours Cernobyl Zone >> 30 YEARS OF THE TRAGEDY OF CHERNOBYL

30 YEARS OF THE TRAGEDY OF CHERNOBYL 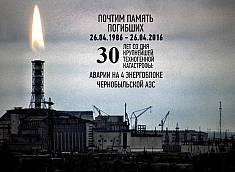 30 years have passed since the disaster, which will long be remembered all over the    world.

30 years have passed since the radical turn of history.

30 years Ukraine is struggling with the consequences of the Chernobyl accident.

The myth that nuclear power was completely safe refuted April night April 26, 1986. According to experts, the accident occurred due to the attempt to do an experiment on the removal of additional energy during operation of the nuclear reactor core. People in Chernobyl were exposed to 90 times greater than the fall bomb on Hiroshima.

The explosion killed two people, one died immediately, the second man managed to bring to the hospital. The first rushed to the crash site fire service and set about their job – there was a great battle with the fire. They extinguished it in canvas overalls and helmets. Other remedies have not been, and about the radiation threat, they had no idea – just a rumor began to spread in a couple of hours that the fire that something different from the usual. By morning, firefighting extinguished the flames and started to lose consciousness – was the effect radiation damage. 136 employees and rescuers who were on that day at the station, got a huge dose of radiation, and every fourth died in the first months after the accident. Radiation sickness has claimed the lives of a very large number of people and left many people disabled.

For the collection of nuclear fuel residues that have been thrown out by explosion on the roof of the machine room and the third power unit of robots were used. However, the mechanisms have not sustained excessive doses of radiation, and out of order. Then the Soviet leadership decided the problem in the simplest way – conscripts were sent to collect the fuel manually. They are not warned of the dangers with which the performance of their tasks and people have received large doses of radiation has been linked. Those who managed to survive the bitter joke about it, calling himself a “bio-robots”. Liquidators that have not yet become disabled, how to live on a powder keg. After paying a very high price for their heroic efforts, these people undoubtedly deserve international support.

In the next three years the struggle with the consequences of the explosion was engaged in a total of about half a million people (almost half of them were conscripts, many of whom were sent to Chernobyl actually forced).

The total area of radioactive contamination was more than 160 thousand square kilometers. At the moment, it is a huge part of the territory of Ukraine, Russia and Belarus. Farmland were contaminated. 186 settlements were evicted. 130 thousand people lost their homes and were relocated from the contaminated areas. 30-kilometer zone around the plant was declared “exclusion zone” ..

In accordance with the Memorandum signed in 1995 between Ukraine, countries “Big Seven” and the European Commission, November 30, 1996, it was decided on the final stop of the first unit, and March 15, 1999 – the second unit.

December 11, 1998 the Law of Ukraine “On general principles of the subsequent operation and decommissioning of Chernobyl NPP and transformation of the destroyed fourth power unit of this NPP into ecologically safe system”.

April 25, 2001 the station was reorganized into the State Special Enterprise “Chernobyl NPP”. From that day, the company is working on removing the units from service, disposal of radioactive waste and the construction of the fourth power unit of the New Safe Confinement (protective structure), designed to replace the object “Shelter”.

New Safe Confinement – a multifunctional complex for the transformation of the “Shelter” into an ecologically safe system. According to the project, the main building, which is part of the New Safe Confinement will take the form of an arch height of 108 meters to 150 meters and a width of 257 meters.

In December 2003, United Nations General Assembly endorsed the decision of the Council of CIS Heads of States to proclaim 26 April the International Day of Remembrance of Victims of Radiation Accidents and Catastrophes.

Millions of people around the world today will give honor to the liquidators. The team of Go2chernobyl.com also bow our heads over those who saved the world.

The team go2chernobyl.com invites everyone to visit the place of glory liquidators heroes.
Total 5 steps separate you from the most unusual trip in life