Certificates
Tours Cernobyl Zone >> You have never heard this before: alternative versions of the tragedy, buttressed up by facts

You have never heard this before: alternative versions of the tragedy, buttressed up by facts 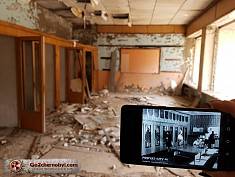 Why did Chernobyl explode? – There is still no unified response to this question. Some blame the employees of the stations, others are sure in the imperfection of the design, and third persons believe that the USSR authorities had responsibility for everything. Which is how, there are several more versions of what happened ... some very interesting versions.

Supporters of the ufological version do not undertake to name the reason of the explosion, but they make some adjustments to the events themselves. The bottom line is that a large number of residents of the city were seen above the UFO station, which is confirmed by horrify photos of Chernobyl.

The main witness to all that’s happening was the dosimetrist M. Varitsky. He said that a shining ball with a diameter of about 7 meters was clearly visible in the sky after the catastrophe. At that time, the dosimeters showed 3000 mR / h. The ball suddenly emitted 2 bright beams of light on reactor 4, hovered for several minutes and flew away smoothly towards Belarus. After these events, the devices showed 800 mR / h. At first, scientists thought that the dosimeter was not working, but thorough checks did not confirm this.

Supporters of the ufological theory are confident that it was thanks to the UFO that a catastrophe was avoided, the consequences of which could be the most terrible in human history.

This version belongs to the Deputy Chief of Staff of the Special Zone Troops, Colonel V. Podsvirov. He expressed the opinion that the explosion at the nuclear power plant in Chernobyl could not have happened by good fortune, but was a carefully planned diversion of the American special services. “The reliability of nuclear reactors has been confirmed by numerous experiments, so the simultaneous failure of two cooling systems was impossible,” the colonel said.

Another argument is that the US space satellite, which took photographs of Chernobyl after the explosion, simply could not accidentally be at the right time and in the right place.

"Duga" was specially designed to detect the launch of enemy rockets in time. It was so powerful that it could easily disable the equipment of ships and aircrafts, as well as disrupt the telephone network. On this occasion, some countries even made claims to the Soviet Union.

So, there is an assumption that the radiological station could negatively affect the equipment of the nuclear power plant, in particular, heat the network cables. By the way, it is precisely this heating of the cables of the 4th power unit that is mentioned in the report of the KGB of the Ukrainian SSR in 1986.

The version of a local earthquake was first put forward by E. Barkovsky an employee of the Academy of Sciences. He found that a second before the Chernobyl disaster, a seismic shock was recorded. Moreover, a couple of days before the accident, a strong deformation of the foundation of exactly 4 power units was discovered. Immediately before the explosion, the fishermen heard an incomprehensible underground sound, and after the accident, scientists discovered a crack in the foundation of the 3rd reactor.

Adherents of this version also tend to believe that the explosion was caused by an earthquake, but not natural, but man-made. There is a lot of evidence that during the Cold War, the opposing parties intensively developed the so-called tectonic weapons. Its main advantage is that the effect of such a weapon is practically no different from an ordinary earthquake.

Adherents of this version even claim that tectonic weapons were also used in Armenia when an earthquake occurred there in December 1988, in addition to Chernobyl.

It is not clear, which of these versions really corresponds to reality, and which is just the result of a violent fantasy.
In other matters, you will be able to answer the question yourself: why did the accident at Chernobyl occur?

Right now, leave your request on the website, take your passport and go to explore the most mysterious place on the planet.