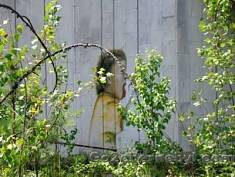 What is Chernobyl tourism. Does he have a right to exist ...

On a warm April night of 1986, a terrible, man-made disaster of a universal scale occurred at the fourth power unit of the Chernobyl nuclear power plant. The consequences of the disaster are felt to this day.

Unfortunately, this is not the first and not the last catastrophe of this format. The peaceful atom also made itself felt at the Fukushima nuclear plant, which is located in Japan. A tragedy happened there a few years ago, too, not because of a person’s fault, but because of Mother Nature. The accident at the Fukushima nuclear power plant, despite numerous security systems and the latest warning mechanisms, once again confirmed that a “peaceful atom” cannot be safe. A person is not able to control what he created and what he took power over, especially if it concerns the “peaceful atom”. The natural factor has a huge impact.

But ... back to the Chernobyl disaster. After the evacuation of the population, the territory was decontaminated (they tried to wash the Zone from radiation). Many villages with houses and households were simply buried in the ground. This result, although it gave a huge, but completely clean zone, did not become, and therefore the country's leadership came to the conclusion that the creation of a 30-km exclusion zone would be the most effective and correct solution.

Oh, what a sorrow it is for hundreds of thousands of people who have left their homes. People, especially old people who lived for generations in a quiet, native Polesie, could not understand what kind of atom this “peaceful” is. Now in the Exclusion Zone there are a small number of dumpers who returned almost immediately after the evacuation. They returned to their homes and today they keep the household there, lead a separate lifestyle. All of them are already old, there are no young permanent residents in the Zone.

A visit to the Exclusion Zone these days has become very relevant. Tourists from all over the world wish to see Chernobyl with their own eyes, salute the liquidators, and this is accessible to almost everyone thanks to go2chernobyl.com.

Nowadays, a tour to Chernobyl has become more than an everyday occurrence than say 10 years ago. But there are a lot of people who are against this type of study tours. Opponents of the Chernobyl tourism claim that trips are hazardous to health, and that such trips are blasphemy and abuse of the memory of the liquidators. Is it so? Let's figure it out.

All routes in the Exclusion Zone are laid along the most clean roads and trails from radiation. This is the first. Plus, the radiation background fell by dozens, or even hundreds of times. We must pay tribute to the liquidators, if they did not carry out decontamination work, then it would hardly be possible to safely walk the streets of the city of Pripyat. Since Pripyat is located closest to the Chernobyl nuclear power plant, the city suffered the most severe radiation pollution. The liquidators literally washed all the streets of the city, the facades of buildings and reburied tons of contaminated land.

Yes, in the Chernobyl exclusion zone there are radiation spots that emit tens and hundreds of x-rays, but we know about them and we don’t take people there. Despite the fact that the radiation background in different parts of the zone, located even in close proximity to each other, can differ several times, there are specially designed safe routes along which radiation is even lower than in Kiev. The dose of accumulated radiation per day of visiting the ChEZ is the equivalent of a tenth of ordinary medical fluorography. It turns out that being in the Chernobyl zone accompanied by qualified specialists while the excursion lasts is pretty safe. In this regard, we urge you to think again before contacting unqualified organizers.

Guided tours to the Exclusion Zone led by go2chernobyl.com guides are absolutely safe. People who visited the Exclusion Zone as nuclear tourists are all alive and no one complains about their health. But critics of tours to Pripyat and Chernobyl can not argue their arguments.

Visitors to the Chernobyl Zone pay tribute to the victims of the accident, who lost their homes, health, lives in the struggle for the Planet. After all, it is customary to honor the memory of those who died during the Great Patriotic War, visit places of military operations, lay flowers at the mounds, and propagandize world peace. The same situation is with Chernobyl tourism. A visit to the ChEZ is not entertainment, not game activities, and not Disney Land. This is a clear lesson to all mankind about mistakes that cannot be fixed. Those who see the post-apocalliptic picture will be able to tell their descendants what can and cannot be done. How to handle a "peaceful atom." How to prevent an accident. We also conduct a quick Radiation Safety Course, which will be useful to everyone. Our qualified guides will teach you how to behave during an atomic explosion, tell you what you can do, and what’s not worth it, how to protect yourself and your loved ones from the harmful effects of radiation. All this can be understood.