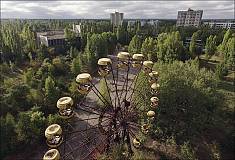 There are a lot of places on the planet abandoned by man. Shafts, towns, whole cities ... All of them cause rather dark feelings. But here the situation is special ... Pripyat is a small town in our Ukrainian Polesye, has become a world famous monument to a terrible catastrophe.

It was Pripyat and was not Chernobyl contrary to popular belief, that suffered the most from the Chernobyl accident. Chernobyl is located 15 km from the power station, and Pripyat is only two. Former locals recall that from the roof of the 16th floor an explosion and a fire were visible and heard on April 26th.

Walking around this city you are trying to compare what you see with what you read in Wikipedia about one of the most dynamically developing cities of the Soviet Union.

The size of Fastov (small Ukrainian town) now, for example, it has 47 thousand inhabitants. Only here is cooler than in Fastov. Because during the construction new innovative ways of building and architectural solutions are being introduced, there are wide streets and parks, illuminated advertising everywhere, bright panels and decorative ceramics on the facades, and a chic infrastructure. After all, a space is created for the life of the best minds of the country. Experts of the entire Union dreamed of getting a job at the Chernobyl nuclear power plant, which meant living in Pripyat. According to the 1985 census, representatives of 27 nationalities lived here.

Shops, cinema, swimming pools, cafes and restaurants, schools and kindergartens, equipped with the latest hospital (looking ahead, say that now it is one of the most terrible places in the city), its own pier and railway station - this is literally a model of an ideal modern city, pride of THE USSR.

This model ruined overnight, like a house of cards from a gust of wind. During the day after the accident at the ChNPP, on April 27, all 47,500 people were evacuated from Pripyat. They left the apartment for three days, but could not return to live even after thirty years. The city is uninhabited. The city turned into a ghost. It is on the maps, it is in the Ivankovsky district of the Kiev region, it has its own territory and borders, which are carefully guarded, but there is no more life in it.

Coming here with each new group, we are amazed how quickly nature absorbs human traces. A maximum of ten years, and the most buildings will ruin or become so wrecked that it will be dangerous to enter or even approach them. Yes, and it is unlikely to be possible because of the trees and shrubs that absorb everything in its path. "Broadway", as the locals called the main pedestrian street of the city they have already turned into a narrow path covered with branches, leaves, and rubbish.

The abandoned city disappears, ruins, leaves. Very soon the ghost town will be able to make out only on the map.

Why didn't people come back here?

Being so close to the epicenter of the explosion, the city took over the lion's share of emissions and radiation. Remember, we told about the Red Forest? The tops of its trees covered in emissions and they turned brown. And right behind this forest - Pripyat. All that did not detain the pines of the Red Forest fell on him.

The first time after the resettlement, the liquidators tried to clear the city, deactivate ... The horror was that it was useless, people spent their health, and some of their lives, in vain. Due to the increased level of radionuclides, people will be able to return to Pripyat not earlier than the middle of the XXI century. Even the "self-settled" do not settle here.

Of course, not everywhere there is a large level of radiation, as many believe. There are places where the dosimeter shows the acceptable numbers for stay and life. And there are places and objects where the level of radiation exceeds the norm by 50 thousand times. Therefore, everything was thrown here, even pets (they were not allowed to take with them). Many of them died, many became wild. They say that a pack of feral dogs attacked the liquidators ... These are just unconfirmed rumors, but walking without a guide who knows the "luminous" places is quite dangerous.

In the article about myths of the Zone of Alienation, we have already written that the Zone, although “conserved” in 1986, is changing. There are many reasons for this: the advancing nature, the natural processes of destruction of abandoned buildings, marauders. Many of the apartments were taken away and the liquidators themselves buried in the burial grounds, and the looters took something away. Apartments are empty, windows are broken, trees sprout through them. The spectacle is truly sad.

But in the shop “Rainbow” there is still a warehouse of old plates, sideboards and pianos ...

What can be seen in Pripyat?

The Slogans, posters, red stars, signs are everywhere here. The ban on Soviet symbols did not reach here. And as a jeer on the roof of one of the nine-story buildings, the slogan is "Let the atom be a worker, not a soldier". They say that the next day after the accident, someone hit the letter “a” in the first word, which caused the inscription to acquire a rather piquant meaning. At some point, the inscription "put" all on the roof. A few years ago, stalkers returned it to the place.

Living buildings are madly similar to our houses built 60-70s here. From that, going into them, it becomes even darker. You realize all the shock and inevitability, despair and powerlessness of those who left these houses in a hurry. In summer, the real jungle is here now. Many buildings are in disrepair; some cannot be seen behind the undergrowth. Therefore, we do not recommend walking here without an experienced guide.

Probably the photos with a Ferris wheel from Pripyat flew around the whole world. What could be sadder than the children's rides, the park, which will never receive visitors? The cars on the motordrome still stand, the looters were afraid to take them because of the accumulated radiation.

House of Culture "Energetik" with portraits of the leaders of the USSR. In the kindergarten there are beds and somehow surviving toys, there are cards for the detainee in the police buildings: “I was aimlessly wandering around the hostel number 17, which offended human dignity”, there are geographical maps and notebooks of students at school -  ... All these “artifacts” can still be found in a ghost town. And from that he catches even more melancholy. And fear. All these little things are evidence that you are not in the film, it is a reality.

What is dangerous trip to Pripyat?

By no means. You can be afraid only of your experiences and how emotionally you will transfer this trip. In Pripyat, you can really feel like a hero of a movie about post apocalypse on earth. Moreover, the plots are enough.

The prototype location in one of the most popular in the world of computer games S.T.A.L.K.E.R. became exactly Pripyat. The main character is fighting with monsters here who generated by radiation and hunting for artifacts. Two missions from another popular toy - "Call of Duty 4: Modern Warfare" - also unfold here.

But no film, no game will not give that mood, that ringing silence that can be felt only by crossing the Pripyat border. Probably, the horror and despair of the people were conserved in this disappearing city. Very soon it will look like a jungle in which here and there a children's slide will meet, or a stand with Soviet propaganda slogans, or the remains of a fallen signboard ...

Sometimes we hear the question: if this place causes such a lot of negative emotions, why should I go there?! It is asked by those who are just thinking about the trip or excursion to Pripyat. Those who visited Pripyat, and in the Zone in principle, do not regret it. This is not only sorrow, sadness, danger ... It is also a desperate desire to go out and live life to the fullest.

Like any extreme tour, a visit to Pripyat gives a powerful adrenaline rush and reboots consciousness. Try it!