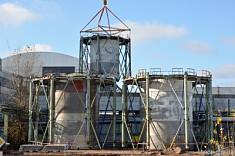 The New Ventilation Pipe project is led by Vitaly Shurygin. He noted that the dismantling of the VT-2 is unique. Their uniqueness lies in the fact that they are carried out in conditions of radioactive contamination, with an increased level of ionizing radiation. Cramped conditions in a territory with a large number of flyovers, buildings for various purposes and transport communications also cause certain difficulties. Dismantling is carried out by a special crane, the carrying capacity of which reaches 1600 tons. This makes it possible to significantly reduce the time of work.

Fragmentation of previously dismantled blocks is carried out on special sites and continues in normal mode. The work is carried out taking into account the control of the radiation situation. Parameters controlled by special equipment do not exceed control levels due to design documentation.

Recall that on October 31, the dismantling of VT-2 was started. The first block, weighing 32 tons, was placed on a special site for further fragmentation, with the aim of further moving to block No. 3 to the machine room.

On November 5, 2013, the dismantling of unit 2 of the 2-stage ventilation pipe (VT-2) of the Chernobyl NPP was carried out, which was a supporting structure of the pipe weighing 56 tons.

On November 7, 2013, the third block of the ventilation pipe of the 2nd stage (VT-2) of the Chernobyl NPP was dismantled.

Fragmentation of the trunk and pipe support structure weighing about 45 tons is carried out on a special site. For temporary storage, the already fragmented first dismantled unit is transported to the turbine room of the third Chernobyl NPP unit. The fragmentation of the second block continues.

On November 9, 2013, the fourth block (B-4) of the ventilation pipe of the 2nd stage (VT-2) of the Chernobyl NPP was dismantled, consisting of a barrel and a supporting structure weighing 45 tons

Based on materials from http://www.chnpp.gov.ua