Certificates
Tours Cernobyl Zone >> LETTER FROM THE PAST. AFTER 30 YEARS A TOURIST HAS DELIVERED THE LETTER.

LETTER FROM THE PAST. AFTER 30 YEARS A TOURIST HAS DELIVERED THE LETTER. 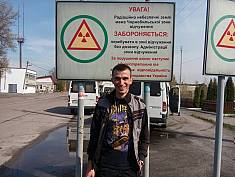 Letter from the past

The citizen of Russia who lives Ekaterinburg has received a letter from the past. 30 years the letter could not reach its addressee… Being in the post box in Pripyat city the letter was waiting for posting so many years. One of the participants of our tour the citizen of Kharkov city Dmitry Bakumenko had executed the role of a postman after 30 years delay.

– I have found a newspaper dated on the 26 of April in the first mail box and the   letter in the second one. – Tells us Dmitry.

This find was noticed by the other members of our tour they even asked Dmitry to present this letter from the past to them. But Dmitry decided to execute the role of a postman, to finish undone work and deliver this letter to its addressee.

He started a real search operation in the network and only within 3 days the relatives of Lyubov Arkhipova were found in the Ekaterinburg due to the ”likes” and ”reposts” of non- indifferent people.

”Hello, Luba, Misha, Natasha. We congratulate you with spring holiday the First of May. We wish you a lot of health, happiness, success in work, study and in garden works. Let the sky be peaceful and clear!” Anastasia holds the letter from her grandmother Tamar Nikolaevna who has passed 10 years ago.

– People have posted the information on the local forums and I have noticed it. Frankly speaking my cousin has noticed it first. When I had looked it through I decided to write a letter to Dmitry. I told him that we are here and we are very happy due to this letter.- Anastasia Bogyslavskay says.

Dmitry assured that there is no radiation on the letter. The postcard from such an unusual and mythic city as Pripyat the relatives will keep as a family treasure.

What interesting is in Pripyat? Some people call it ”time machine”, because after being there you feel like you have been in 80s. In fact it is a very good opportunity to see the world without people, to get in touch with nature and to understand mistakes of the mankind…

There are no such book, movie or a story that can give you the atmosphere in which you forget about everything… When you come to Chernobyl you have a strange feeling as if you deal with something that is beyond your understanding.

Go2Chernobyl is very grateful that Dmitry behaved in such a way, he deserves respect and of course for that he had used our services. Now every person can find something interesting in Pripyat, to see everything on its own eyes and bow thanks to the liquidators who have saved our planet.

Go2Chernobyl team is glad to give you such opportunity. We will help your dreams to come true.

If you want to have a ride in our ”time machine”, make stop in 1986, feel something unusual, visit Chernobyl and Pripyat you have only to fill in the Application form.

Here you can watch the video about this story.