Certificates
Tours Cernobyl Zone >> Route E40: the possibility or utopia of a water tour in the CEZ?

Route E40: the possibility or utopia of a water tour in the CEZ? 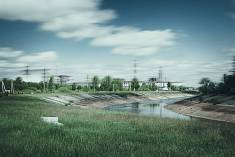 In the USSR, in the 70-80s it was possible to get to Pripyat by water. The hydrofoil ships such as "Rocket" and "Meteor" were sailing systematically on schedule. You could get from Kiev to Pripyat in just 4 hours, enjoying the nature of these places.  The river port in Pripyat and Chernobyl constantly received people. Unfortunately, after the accident at Chernobyl nuclear station, the water communication was closed. Recently, there has been more and more talk about building a new waterway through Pripyat. Even the name of this way - E40 - has appeared in information reports. Is it really true that tourism to the Chernobyl Zone by water will be possible in the near future?

Waterway E40 is a shipping channel project presented by governments and organizations of Belarus, Poland and Ukraine, which can connect the Baltic and Black Seas. Many politicians and economists believe that the shipping channel length of 2352 kilometers, can significantly increase the level of trade in the region. In this case, the number of workplaces that are so necessary for Ukraine will increase. The way goes through the cities of Gdansk-Warsaw-Brest-Pinsk-Mozyr-Kyiv-Kherson. The way they want to lay on the largest rivers of the region: the Dnepr, Vistula, and Pripyat. The last one is very disturbing for ecologists, because the connection is going to be laid 2.5 kilometers away from the epicenter of the nuclear tragedy at the Chernobyl nuclear power station.

The realization of water tourism in such a unique place as the CEZ, which has become a living monument of the Soviet times, a place of revival of the natural environment and the territory where the biggest accident in the world occurred, should interest everyone. This is an incredible project, which is able to develop a new promising direction in modern tourism in Ukraine.

What is so excited about environmental scientists?

Waterway E40 is not just a channel for connecting two seas. First of all, it is entrusted with trading functions, which will be performed by the passage of large merchant ships. The rivers of our region are not so deep and wide that it is allowed to pass through them by large merchant ships. In order to carry out an intensive trade along this route, it will be necessary to provide infrastructure and dredging works. Experts say that at the bottom of the Kiev reservoir may lie unsafe radioactive elements. If the bottom of the rivers adjacent to the exclusion zone is disturbed, there is a danger to the health of millions of Ukrainians who live below the river. The Chernobyl zone remains one of the most radioactively contaminated places in the world.

Therefore, the government was very much concerned about all world and national figures, activists and scientists in the field of ecology. Everyone says in one voice that this is impossible because there is a huge threat to human security, as well as to the flora and fauna that has been reborn in this area. The fact is that infrastructure works will lead to a change in the natural landscape of the Exclusion Zone and, as a result, will disrupt the peaceful existence of rare animal species.

The Chernobyl Zone has long ago turned into a nature reserve, a place of silence where nature heals its wounds on its own. There are only a few cases where people are possible. The majority of people permanently residing in the CEZ are employees of enterprises - about 4500 people. The second category is self-settlers, there are only 106 people left. They have returned to their homes and enjoy the silence of their native places.

Nowadays, there is only one legal way to watch a river port in Pripyat - to buy a tour to the Chernobyl Zone from the official organizer.

Go2chernobyl.com team invites you to visit Chernobyl and Pripyat on the official tour. Exotic places, a flurry of emotions, the best guides of the Chernobyl Exclusion Zone - this is just part of what you get by ordering a tour from us.

Book a tour right now! And tomorrow you will touch the secrets of the CEZ.