Certificates
Tours Cernobyl Zone >> The Chernobyl accident: how was it?

The Chernobyl accident: how was it? 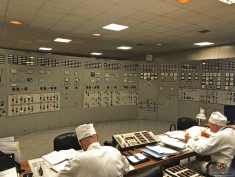 Everyone knows that the Chernobyl accident is perhaps the biggest man-made disaster in the history of mankind. For years, academics, volunteers, the media, and simply interested individuals have asked only one question: "What happened on that unfortunate night of April 26, 1986?"

In this article, we will present one version of the events. She was described at the trial by Academician Legasov.

Time 00:38. The reactor is almost shut down. The operators of the 4th block are walking along the path leading directly to the disaster. Do not turn back. They don't know yet, but ... the bones are thrown! At 30 MW xenon, it still stands out, but does not burn in any way. And the reactor is buried in poison. To top it off, the reactor is not producing enough steam. Increasing power from this steam can only be done very slowly. Within 24 hours! But Dyatlov wants to finish! Akimov and Toptunov have only one front of action: they are pulling out the control rods. Ten each. Half. Three quarters. But the power doesn't budge. And they start extracting them completely. There were 211 rods in 4 reactors. Akimov and Toptunov completely removed 205. Do not forget - the rods are the brakes in this car. Of the 211 rods in the reactor, only 6 remained. As for the fuel: - it cooled down. So the negative temperature coefficient did not outweigh the reactivity. But, despite severe xenon poisoning, they can raise the power up to 200 MW. The control rods are removed. The emergency system is disabled. The only thing that holds the reactor is water and xenon.

Exactly one in the morning. The tests will begin soon. The problem that arose was unsolvable. The power is too low and there is too much water. Test failed. The results are useless. Dyatlov did not care - he only wanted to report on completion.

1:22 am. Before the explosion is less than 2 minutes. Yuvchenko, mechanical engineer, in his office. Perevozchenko is the head of the workshop in the Central Hall. High above the thousand-ton steel shell of the reactor. Digtyarenko and Hodemchuk, CKN operators, in the pumping hall. None of them were told about the tests. None of them knew what would happen.

1:22:30 Toptunov sees a report from the Skala reactor measurement system. Based on the lack of the required rods, the system recommends shutting down the reactor. But Dyatlov does not stop.

1:23:04 Every decision they make pulls the generator back like a slingshot. Since never before. The tests begin. The pumps are turned off and off we go. The pumps stopped pumping water through the reactor. Uranium fuel does not regulate fresh coolant and control rods. The balance immediately swung in the opposite direction. Less than a second and the reactivity increases. In the active zone, the remaining water instantly turns into steam. Voids are created. And fresh water does not fill them. Steam increases reactivity, increases heat, increases steam, increases reactivity. The remaining xenon decays. The power goes up. There is nothing to stop it.

... There is a button in every engine room of every reactor in the world that does only one thing. Quick stop. Immediate cessation of reaction. In Soviet reactors, this button is called AZ-5. Press AZ-5 and the rods will be inserted together and the reaction will stop.

Dyatlov broke all the rules. He destroyed the reactor. He did all this believing in the safety of the AZ-5. A simple button that disables everything. But in the conditions created by Dyatlov it was not. There was a fatal flaw in the exclusion system.

First of all, the core of the core includes graphite tips and, at the time of entry into the zone of the limbs, the chain reaction turned into an explosive acceleration. Each subsequent molecule of liquid water instantly turns into steam. It expands and damages a number of channels for graphite rods. The control rods in them cannot move. Graphite tips are fixed and infinitely accelerate the reaction. The Chernobyl Nuclear Reactor is now an atomic bomb.

1:23:42 Perevozchenko looks at the giant steel lid of the reactor and sees the impossible: the caps of the control rod and fuel channels of 350 kg each jump up and down. He runs to warn the panelist. But he can not stop what is coming.

1:23:44 Steam is blowing up more and more fuel ducts. We don't know what the power was. We know only the latest evidence. Unit 4 should run at 3200MW. There were more than 33,000 MW. The pressure in the core was uncontrollable and it happened ...

As soon as the lid is removed from the reactor, oxygen bursts. It mixes with hydrogen. Overheats graphite. The chain of catastrophe has come to an end.

No one in the room that night knew that the off button would serve as a detonator. They did not know. Because they hid it from them.

Be that as it may, an explosion occurred. And what it has caused has left its mark on billions of hearts on the planet for centuries. The planet will never be the same again. The lives of people who went through Chernobyl will never be the same again. Many years have passed and the Chornobyl Exclusion Zone is no longer the radiation-contaminated place it was back in 1986. Now it is a unique place. Decontamination was carried out and now it is a safe and extraordinary place that is enchanting. Despite the fact that this is an exclusion zone and it is believed that it is uninhabited, now there live and work more than 10,000 people.

You can see this in person by booking a tour to the ChEZ in Go2Chernobyl at the link.

Our highly qualified guides will conduct an unforgettable tour.

These memories will stay with you forever!