Certificates
Tours Cernobyl Zone >> What were the Soviet authorities hiding from the public?

What were the Soviet authorities hiding from the public? 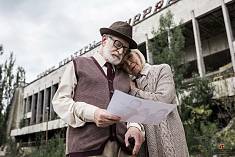 The Chernobyl accident took the lives and health of many liquidators, but it also left even more people without their homes. The tragedy provoked strong critics of the USSR from Western countries, and in order to avoid panic among the population, the authorities decided to hide a large part of the facts through secrecy. Fortunately, more than 33 years have passed since that day and many facts have come out of the shadows of secrecy.

So, five facts that were hidden by the Soviet authorities.

Design flaws of the Chernobyl NPP

Admitting one's own mistakes is always an unpleasant and very painful process, and for the Soviet leadership at the time, it was simply impossible. However, the fact is that the construction of the nuclear power plant, which was being built at an accelerated pace, raised questions long before the accident. According to Vladimir Vyatrovich, ex-director of the SSU archive, after two years of building the first reactor, reports on technical malfunctions of the structure began to come in regularly. Moreover, if we believe the documents declassified in 2006, there were five accidents and 63 equipment failures between 1983 and 1985. Most likely, if the competent authorities had reacted to these factors, the explosion at Chernobyl could have been avoided.

Unit 4 exploded during an experiment that was supposed to show whether the inertia of the turbine generator rotor could be used to generate electricity. The experiment was supposed to take place at 700 MW, but before it started, the reactor power level was at 30 MW. The operator restored the power to 200 MW and began to work on the experiment. Immediately afterwards, the reactor power began to increase rapidly and after a few seconds the operator had to press the emergency cooling button.

It is the incident of those few tens of seconds that will soon become the official answer to the question: "Why did Chernobyl explode?". However, according to Anatoly Dyatlov, who was the deputy chief engineer and supervised the operator's work during the experiment, all actions were provided for in the instructions, and the operator just followed its instructions exactly.

Innocence of the staff

After the emergency button was pressed, two explosions occurred, completely destroying the reactor. The blame was placed on Dyatlov, who, having received a radiation dose of 550 rem and suffering from a complicated illness, was sentenced to 10 years in a penal colony.

All authorities, including the courts, the KGB (the Committee for State Security), and the State Commissions, were supporters of the position of blaming the personnel.

Only 20 years later, in the IAEA's report, it admitted the fallacy of this position, arguing that the actions of the personnel were carried out within the guidelines, and if there were any deviations, they had no effect on the development of the accident and ecological problems in Chernobyl.

The IAEA report says that on the day of the accident, Unit 4 was working with the emergency cooling system shut down and a reduced operational reserve of reactivity (ORR). However, the personnel didn't know that the ORR value was below the norm, so they didn't know they were violating the regulations.

In addition, liquidators and firefighters also didn't know the dangers of traveling to Chernobyl and the damage it can do to their health. This is evidenced by the story of station employee Valery Zabayaka, who also took part in the liquidation of the accident.

Only 20 minutes after the reactor exploded, KGB (the Committee for State Security) officers from the Pripyat Division were on the spot and carefully classified all materials related to the accident and radiation levels.

This helped avoid mass panic, but 50,000 people left their homes without any belongings. When they were asked: "When can we return to Pripyat?" the answer was: "In a few days". Moreover, when the happy residents of Kiev went out to Kreshchatik to celebrate May 1, the capital was at a high peak of radioactivity.

Tours to Chernobyl: life after death

Despite all the horrors of 30 years ago, almost anyone can go to Chernobyl nowadays. And it's even easier than you think. GO2Chernobyl team takes care of all organizational issues, so all you have to do is to take your passport, camera and a bit of positivity. You can not only take unique pictures of the current Chernobyl, but completely immerse yourself in the atmosphere of post-apocalyptic 1986 year.

Half-ruined USSR buildings, rare wild animals that are nowhere else found, legendary constructions and historical places about which books are written, movies are produced and games are made - all this is just the top of the iceberg. Our guides will take you to the most mysterious places, introduce you to the inhabitants and make sure you have a great time.

Leave a request as soon as possible, and we guarantee that after this trip you won't be the same.