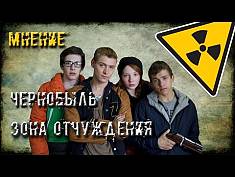 Announced the second season of the series: «Chernobyl: exclusion zone». Many look forward to the continuation of the beloved series.

… But many, even before the official release of the film on screens can visit mysterious places of the Chernobyl exclusion zone.

If you have a desire to take a ride on comfortable time machine and be in 1986 year, feeling somewhat actor television series “Chernobyl: exclusion zone”, you only need to choose a suitable tour in Chernobyl and Pripyat. All the rest we will do for you.

Company Go2chernobyl- the best and reliable companion in the exclusion zone. Our professional guides will show you the most exciting, interesting places in Chernobyl and Pripyat. Plan our excursions is designed in such a way that you will never forget this trip and will definitely want to come back here again. Because, the exclusion zone is like a magnet. Go there once, you cannot deny yourself the desire to visit it again.

A little reference about a loved series «Chernobyl: exclusion zone»:

Movie journey that goes into the mystical thriller «Chernobyl: exclusion zone»- a Russian television series production company «SineLabProdakšn» was filmed on request channel TNT. Pilot series- name «Chernobyl». Creator of the series is a Swedish filmmaker Anders Banke. The premiere of the show took place in 2014 in the cinema “October”, it was attended by the stars of cinema and show business (the passage of time these screenings have been held in 18 cities of Russia), and this was the first case in Russia, when the series was shown in its entirety in the cinema before the official premiere on TV.

All the action movies – show unfolds at various times- in our days and in 1986, even before the accident in the Chernobyl: exclusion zone. Five friends go on the car to abandoned and a mysterious ghost town of Pripyat, which is not so far, namely, five kilometers from the Chernobyl nuclear power station. In pursuit of the thief, they accidentally fall into the past. In the first episode the viewer will be shown two conventional, Moscow teenagers, they started the party, case it served as the departure of the parents at the resort in Turkey. Festivities, of course, occur rapidly, a lot of friends, alcohol, dancing. In the morning all the bad, Internet does not work and it does not add to the good mood. Finally, they waited for IT-master, he repairs the faulty internet, but takes away from the safe of 8 million rubles. Ironically, instead of wisely flee with the money, the offender takes off video message, which says that goes to Chernobyl exclusion zone. Main hero of, eager to take parental money back and going with his friends behind him, a journey full of risk and an indescribable feeling, Chernobyl exclusion zone…

Chernobyl exclusion zone is shown in the series by an independent character, which has its own logic and plans, it can transform your voice, appearance, intimidate, or vice versa, even to come to the rescue. It has its own perspective, and only she knows about them…

Some secrets of «Chernobyl: exclusion zone»:

To our readers, we decided to open up a screen of secrecy and mystery of this fascinating film. Since the conduct of the shooting was in the exclusion zone was difficult, there was filmed a few scenes, it was just the usual shots, none of the actors in them did not take part. The more of the scene of Pripyathad been removed in Russia in cities where there is a similar architecture (an abandoned summer camp “Salute” in the Moscow region, abandoned ferries wheel in the city of Kolchugino) also used computer graphics for decorations (for example, a panoramic view of nuclear power plant before the disaster). Plus, a few shots were recreated with precision photo with real places of Pripyat and Chernobyl. Part of the filming took place in the city of Moskovsky, there were shooting of the scene in Pripyat before the accident.

The series «Chernobyl: exclusion zone» started with high ratings in the air quite a popular channel TNT.13 October premiere series of «Chernobyl» to the public from 14 to 44 years, scored 28.4% share of Russia, then watched it every third spectator. For the very first week after adding a series of portal Rutube, the show was able to collect 6,1mln. display. He also was able to get to the list of “top 10 Russian serials 2014”. In 2016, due out the second season of the television series. Look forward to…